Snow in Tokyo is a rare occurrence, except for February 8th. It was said that this was the most snow that Tokyo has seen in over 45 years. Now, if you’re from Canada or anywhere where snow is the norm during winter, then this will sound like nothing. There has been light snow over the course of winter but nothing like this. Here’s a photo for comparison.

I am used to fluffy and dry snow back home, but the snow here was sticky and wet. This made for a slushy mess everywhere. The pathway from my apartment to the train station was nothing but slush and if you were not wearing boots, your feet were going to get soaked.

For those who deal with this every year, then this is nothing. But, Tokyo and the surrounding areas are not well equipped or used to handling such a huge amount of snow in such a short time span. What affects the most people is public transportation. Now, you can call me crazy but I was brave (or stupid) to make my way to Tokyo Disneyland. Since this amount of snow is rare, I had to take photos.

I expected there to be train delays, and going across Tokyo was not bad at all. Granted this was earlier in the day. My train line Keio, was delayed only by half an hour. On the way back from Disneyland, that is a whole other story in itself. 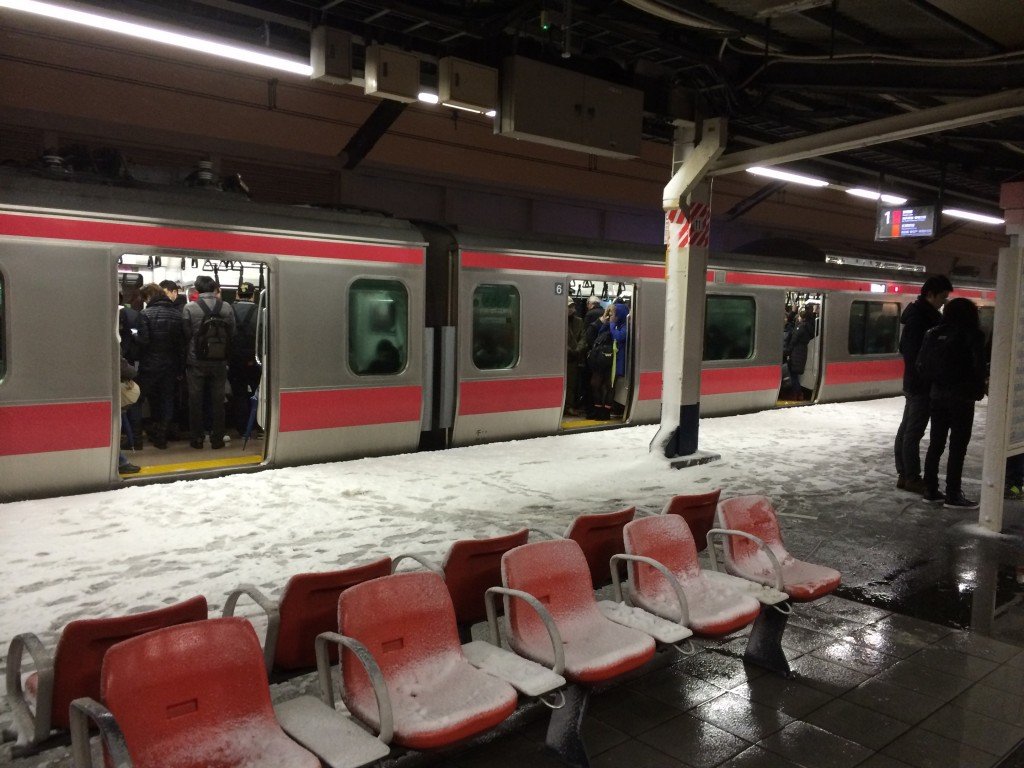 Maihama Station train platform completely covered in snow. That train was there for almost 30 minutes.

As a friend and I were enjoying Tokyo DisneySea there came an announcement throughout the entire park. They were warning guests that due to inclement weather, the trains and buses may stop for extended periods of time. They were politely telling us that if you need to take public transportation home, you better leave now.

Not knowing how much of a delay I was going to experience it was in my best interest to start making my way home. When I arrived at Maihama Station, it was completely full with people who were at Disneyland. I waited around the train station for about an hour before the next train would come by. The one train that was going the opposite direction of me was stopped at Maihama Station due to wind, and they were waiting for it to die down before proceeding to the next station.

If you’re unfamiliar with Tokyo Disneyland, it is located in Tokyo Bay. Which means there is a lot of wind.

Finally, after an hour our train, bound for Tokyo, finally arrives. Since there was so many people waiting, you bet the train was crowded just as if it were rush hour on a weekday. The train was packed with people holding onto their Disney purchases, which made it just that much more crowded.

We slowly make our way towards Tokyo Station, when at the last stop before our destination an announcement comes on. It was telling passengers that Tokyo Station was completely full, and that we had to wait for an undetermined amount of time before we could get to the station. We were advised to transfer to the subway at this stop.

Myself and a couple hundred other people got off the train and made our way to the subway station. We get to the ticket gates and the area was at a stand still. The employees locked the ticket gates because the platform for the subway was completely full and we had to wait for it to clear. Now, I am standing with at least another 200-300 people, all crowded in this tiny space waiting to get through. Not being able to move, literally.

After about 10 minutes the employees open the ticket gates to begin allowing people through. There was such a push to get through the gates that you had no choice but to go with the flow, regardless if you even had a ticket to get through or not. Eventually the employees opened ALL the ticket gates. Since there was such a flood of people, no one was able to either tap their commuter pass cards or insert their tickets. Everyone just went through the gates.

After flowing down the river of people to the subway, I got on and made my way to Shinjuku Station. Once I got to Shinjuku station I transferred to the Keio Line, which was only running local and semi-express trains. Normally there are Special Rapid trains, but not that night.

I get on the train and continue on the last leg of my journey home. I had to make one transfer in Chofu before I could get home. When I transferred I noticed that the train I was going to be taking was the last train of the evening. Service was being suspended after that due to weather. It was only 10pm. Normally, the last train from that station is particular is 12:43am.

Finally, after 4 hours I got home to my station. Normally it is only a 1 hour journey. But, the fun was not over yet. There was so much snow that the area I live in was completely transformed by the snow. It looked like the Apocalypse had hit. All the stores were closed (expect 7-11) and there was wet snow up to your ankles.

The pathway to my house was a wet and muddy mess. My shoes got completely soaked. It was only 10pm but there was not a soul in sight. I guess they were the smart ones.

Not Doing That Again

The snow was nice as it reminded me of home. But, I do not want to have to experience this again. Wet and sticky snow is terrible, and I much prefer the white fluffy stuff we get back home in good ole Saskatchewan.