Maid cafes became incredibly popular a few years back in Japan and have expanded around the world. They are present in major tourist areas throughout Tokyo such as Akihabara and Shibuya. These cafes specialize in having their servers dress up in French maid outfits and treat patrons as their masters. They then act “cute” and do “cute” things such as talking in a high pitched voice. If you have ever watched anime with the original Japanese audio, then you know exactly what I am talking about. If this sounds strange to you, then you would be correct. We had no plans on going to one of these cafes but it ended up happening. So, here’s our story.

Our unplanned visit to Maidreamin Cafe in Akihabara, Tokyo happened when we were in search of food. A strategically placed menu, that featured adorably decorated food and desserts, caught our eye. Before we could even read the menu this “maid” came up to us and told us (in pretty good English), “The food is so cute, just like you two, so please come and have us serve you!”.

Now, normally these things never work on me, but the fact that she spoke to us in English threw me off. Also a combination of being hungry, wanting to experience a Maid Cafe, and the cute food. This all clouded my better judgement.

The cute maid quickly explained to us how it worked. She then took us to the an elevator that took us to the third floor. You pay by the hour, for your food, and any extras you want such as photos with the maids. As you exit the elevator you are greeted, very ecstatically, by all the maids. 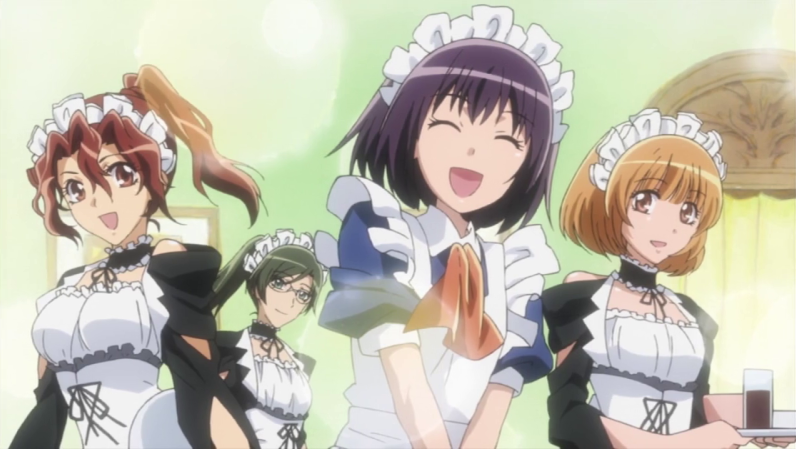 One of the maids took us to our table. Our table was between two different groups. One was a group of young Japanese men who were celebrating their friends birthday. You could tell because of the oversized “HAPPY BIRTHDAY” rabbit ears he was wearing. The group on the other side of us, looked like a couple that were on a date. It’s a peculiar place to go on a date, but to each their own.

Our maid came up to our table and asked us if Japanese was OK. I told her that I spoke Japanese. Even though she is supposed to act cute and adorable at all times, you could see this relief go over her. She quickly explained we had to order food and drinks, that we were paying by the hour, and we could add any “extras” to our experience. Which included items such as getting our photos taken with all of them, or photos just of them.

Once she was done, she pulled out this candle and instructed us to countdown from 5 to make the “magic” happen. I was not too sure what to expect but we counted down to 0. As we hit zero she blew into the candle and it lit up. Magic, I tell ya. She then complimented me on my “incredibly amazing” Japanese (my ability is far from amazing, just enough to get by). She then asked for our names and wrote them down on some points cards. You know, for when we want to come back and collect all the photos of the girls.

After she was done explaining how everything worked, she handed us the menus and skipped, yes skipped, away. Again, image how a girl would act like in any typical Anime.

We opened up the menus and started going through what we wanted to order. After looking at the prices we decided we would only get dessert. The main courses were incredibly overpriced, as to be expected, and for the portion you would get we knew we would be hungry shortly thereafter. We both decided on the, overly adorable, parfaits that were shaped like animals.

After ordering our overpriced parfaits, we watched other people around us. One guy, who was there alone, had a binder full of photos of all the girls individually. He clearly has been to this one quite a bit. The maids even knew him by name. Don’t ask me what his name was, I will not be able to remember. He was wearing a huge pair of bunny ears and got his photo taken with the maids a few times throughout our stay.

Another guy, who knew every of the girls by their (I am assuming) stage names, was sitting alone at the counter. He was an older gentleman who carried an iPad around with him. He would talk to the maids about mundane topics, such as the weather. Meanwhile the maids were bouncing around, giggling, laughing, and hanging off his every word.

Our parfaits finally arrive and we devour them in record time. While it looks rather big, they put a lot of corn flakes (or whatever the Japanese equivalent is) at the bottom. There was almost more filler than ice cream. Which was disappointing for the 800 yen price. But regardless, they were delicious and incredibly cute. While eating the maids would have loud arbitrary conversations for us to hear. They would be about nothing in particular but it was clearly for the “atmosphere”. I go back to the anime comparison again.

We were there around 5pm, which is when the sun begins setting in the winter. Shortly after finishing our parfaits, one of the maids goes on this stage. She instructs everyone that she needs our help with her “magic” so we can “light up the sky”. It resulted in us and everyone else in the restaurant wave our arms in the air and point to the ceiling. All at the time. When we did this, this magical sparkling sound filled the room. You know what sound I am talking about. And the lights turned from yellow to blue and stars being sparkling on the ceiling. I had no idea I was a witch, go figure.

By this point we have been there for close to two hours. We did take our time, but the service was a little “slow”, which I am not sure if it was on purpose or not. We opted not to get a photo with the girls, as we already spent quite a bit of money by this point. By the end of it we both ended up paying about 2000yen (roughly $22) for the parfait, experience, and time we were in there.

While the experience was expensive (that’s to be expected for a place such as this) and a little strange, I am glad that we did it. It was an overall positive experience and if you want something a little strange and/or unique then give it a try. Just be ready to spend no less than 2000yen per person.

If you’re enjoying my adventures here in Tokyo, then make sure to subscribe.